The Putnam County Public Library provides free and equitable access to information, services, and resources for all residents of and visitors to Putnam County. The library provides outreach and community services through materials delivery and off-site programming. A belief in the transformative power of literacy through the adoption of new technologies informs all aspects of PCPL’s service models including collection development, programming and instruction, onsite and remote support, community partnerships, and early literacy initiatives such as the Imagination Library program. The library continues to partner with area schools, community organizations, local business, and its neighbor, DePauw University, in order to enhance and expand its services.

The population of service area for PCPL  is approximately 37,000.

The Putnam County Public Library strives to connect its users through the shared acquisition of knowledge, the cultivation of curiosity, and an ongoing engagement with the world around them by promoting and supporting all forms of literacy, creativity, and cultural engagement. 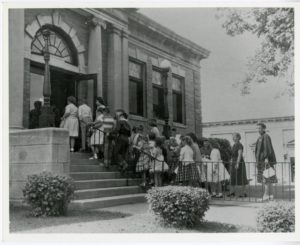 In February of 1902 the Greencastle Carnegie Library Commission was created and subsequently received $20,000 from the Carnegie Foundation. The library’s cornerstone was laid on August 28, 1902. The building was completed the following year, and its dedication was held on June 5, 1903.

The library did not become a county entity until 1967 when the city of Greencastle and County Library Boards merged.

With much need for additional room, the library went under major renovation beginning in 1995. The following year, the completed renovation added an additional 18,000 square feet to the original 6,000, as well as a parking lot adjacent to the new entrance.These additions allowed for expanded departments that we enjoy today.

Much of the original building, including the original woodwork and tables, have been preserved and refinished. In fact, the old checkout desk is still in use in the main lobby.